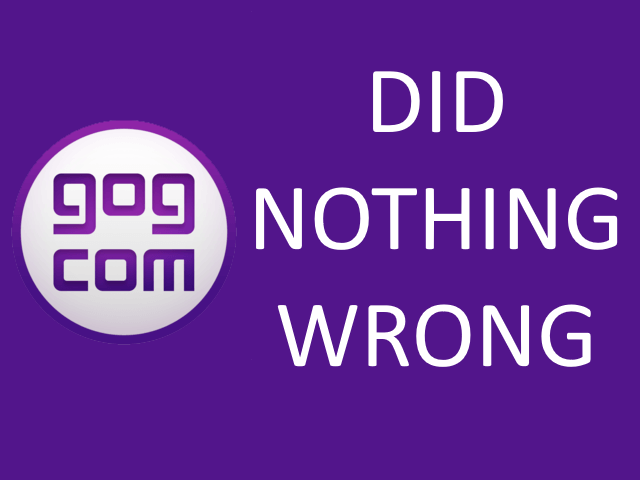 GOG Did Nothing Wrong

So the other day GOG or more so their PR guy put out a comical tweet that used a hashtag that has apparently been used by trans activists for the last while. I have no idea if they created it themselves or co-opted it or whatever it really doesn’t matter. At the end of the day a tweet making use of a hashtag that has nothing to do with the supposed regular usage of the hashtag is neither wrong, evil or transphobic. In short GOG did nothing wrong.

Now who cares really? Well in all honesty nobody. A few loud mouthed trans activists whose only purpose in life is activism and a few games journalists that just love to beat the dead horse of progressivism. The activists I can understand. Their whole reason for existing is dwindling as the issues with the trans community dwindle. In the past trans folk were treated poorly and couldnt legally change genders on their IDs for example and had a whole range of issues that also go as far as the risk of assault and even murder simply for their identity. That was in the past though. Things have gotten better for them in so many ways so that now the activists have little else to fight for beyond made up pronouns like Xe/Xim/Xir and a whole host of other such bollox and innocuous crap like the tweet in question.

Now activists aside there were a few more people turning into gibbering incoherent fools yammering on incessantly about this huge dose of nothing. A “nothing-burger” if you will. Our intellectual and moral superiors (at least in their minds that is) the Games Journalists. Pseudo intellectual bloggers that hate the medium they comment on. Since the tweet came out and then disappeared, as either the PR guy rethought whether he should post it knowing how insane activists and “journalists” are these days and having had such insanity directed their way in the past or because a higher up had those thoughts, the progressive side of the internet went into full psycho mode.

There have been reports that certain shithole forums where rabid SJW types congregate have begun a campaign to dox and harass certain members of the CD Projekt team in order to collect the scalp of the PR guy in question and potentially more besides. Personal information including info on the persons family were released and the psychotic mass of subhuman scum that exists there rolled out and went to work trying to make their will become reality.

As of yet GOG hasn’t caved at least to my knowledge and hopefully they wont. The guy responsible does not deserve to lose his job and further from that they need to engage with law enforcement to help end the harassment being aimed at them. No matter what any activists or shitty bloggers with too high an opinion of themselves say GOG did nothing wrong. They issued an apology which they had no reason to do just as they did in the past when such nontroversies happened which again they didn’t need to do.

To the guys over at GOG. I have not bought a ton of games from you but I have bought a few and will be buying more in the future. I am not offended by the tweet or any of the other things that these game bloggers and activists have been shrieking about. The vast majority of your customer base doesn’t care about them either. What we want is good games. New ones are great but old ones are great too. So please Good Old Games make sure that the games we grew up with #wontbeerased. Also when are you going to get around to giving us Cutthroats: Terror on the High Seas? to their